You are driving home on a dark highway late one night when headlights suddenly blind your line of sight. A wrong-way driver comes quickly towards you. Surely this can’t happen.

It can – and it does. The National Transportation Safety Board (NTSB)  states that on average, about 360 people die each year as a result of wrong-way collisions.

An all too common occurrence on our highways, wrong-way driving often leads to the  most feared traffic accident, the head-on collision.  With a recent spike in wrong-way driving accidents, odds are, you or someone you know may end up in this dangerous situation.

Hopefully you’ll never encounter a wrong-way driver. If you do remember these five helpful tips: 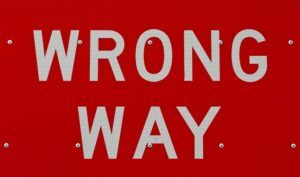 1. Identify a wrong-way driver as soon as possible

The more time you have to react, the higher the likelihood of avoiding an accident. It’s important to scan the highway ahead as far as you can see. Be extra cautious of wrong-way drivers at night and on weekends. Thirty-one percent of wrong-way collisions occur between midnight and 3 a.m. while 57 percent occur on the weekends.

If you can move to the right lane as quickly as you can. Approximately 69 percent of fatal wrong-way collisions involve alcohol. Impaired motorists are notorious for driving slowly in the oncoming left lane (their right) to avoid being stopped.  Wrong-way drivers usually think they are going in the right direction of traffic.

If you can’t move out of the way attempt to grab the attention of the wrong-way driver. Honk your horn and flash your lights in hopes they see you.

The most deadly type of accident is the head on collision. Almost 10 percent of all roadway fatalities are the result of head on collisions according to the National Highway Traffic Safety Administration (NHTSA). If you are unable to move from the area, turn your vehicle sideways to avoid being hit head on. With this method serious injury is still likely but you will improve your odds of survival.

Don’t assume someone else has called the police on a wrong-way driver. If you have successfully avoided danger, pull over and immediately call them.