The Creation of the SaFlector Sleeve. Our Story.

Traffic Safety Supply Co works in partnership with EML to provide a sleeve that enhances safety of existing signage and posts.  The story about how the SaFlector sleeve came about is both inspirational from an inventor perspective as well as one of a safety expert.   Here are the details of how the idea came to fruition from the creators themselves. 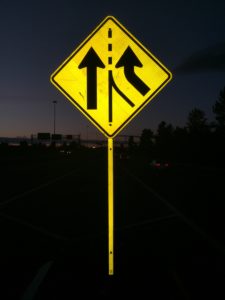 We’re a pair of traffic engineers from the Seattle Department of Transportation (SDOT).  Over time, we’ve held various positions with responsibilities relating to safety and safety review, for which we have included some background.

Mike Morris-Lent, PE: I started with SDOT in 1983.  From 2009 through 2015, I had oversight of the department’s High Collision Location safety program.  Work on the safety program included performing spot safety reviews and identifying, designing and facilitating installation of safety improvements.  While with the safety program, I expanded it to include review of high collision pedestrian and high collision bike locations.  I also worked to broaden the program’s scope to include corridor safety reviews and to consider types of locations for citywide/systemic safety improvement.

Chris Eaves, PE: I have 21 years of experience in the traffic engineering field.  I’m responsible for Seattle’s Freight program, which deals with truck and industrial community-related – including working with the Port and railroads – movement of goods on Seattle streets.  I also participate in design reviews for private development within Seattle.  My program is currently working with the University of Washington and FHWA (Federal Highway Administration) in innovative assessment of street and building conditions as they affect goods delivery.  One aim of this work is to improve delivery of goods in downtown Seattle.

Over the years, we’ve both done a fair amount of street design work, including with signs.  We’ve both worked closely with our shop- including staff that make signs and crews who perform street sign (and sign post) installation and maintenance work.

Between the two of us, we have been giving thought to and working toward development of a reflective post covering for about 12 years.

The need for, and our thought toward, the reflective sleeve began around 2006.  Up to that time, stop sign posts in Seattle were cedar 4×4’s.  These posts were candy-cane (red and white) striped all the way around- which, from our traffic engineering perspective, we liked for a lot of reasons…

In these ways, the post striping worked to enhance and maintain drivers’ awareness and recognition of our stop signs, which enhanced safety.

About 2006, our Mayor’s office launched an initiative aimed toward having city department’s adopt more environmentally-friendly practices.  An action SDOT adopted in response was to discontinue use of wood signposts and  replace them with Telespar® posts.

Seattle has more than 8000 stop signs.  It has about another 1000 yield signs that have historically had red and white-striped posts, too.  While use of the Telespar® posts was determined more cost-effective and environmentally-friendly, Telespar® (metal) posts are not, generally speaking, made with colored or reflective coating.  So an element not accounted for in our change from wood to Telespar® posts was the loss of the highly-valued markings on our stop and yield sign posts.

There are other cities near Seattle that have red and white posts and value the markings on the posts the way we have in Seattle.  Some paint their posts.  The City of Shoreline, just north of Seattle, placed reflective tape on its metal stop sign posts- work which was well-received by its constituents.  This said, we didn’t see that anyone had figured out a way one could reasonably use for putting these markings onto our new metal stop sign posts.  By this we mean post markings that could be put on in a low-cost way; wouldn’t take a great amount of our very limited crew time; and provided the level of conspicuity we wanted for these posts.

For me (Mike), this was one of those nagging problems that I thought about through different sets of work responsibilities, on and off, over a number of years.  There came a time in the spring of 2012…   …I remember feeling particularly bothered about the lack of markings on our new stop sign posts.  I wondered over to Chris’ desk, and we started working it together.

Parameters for Our Design

We recognized that, in addition to stop and yield signs, there are other types of signs critical to traffic safety – namely yellow warning signs – which would benefit from enhanced conspicuity.

Based on our experience with sign and post work; how our shop works; our crews’ abilities and availability; and fund levels SDOT typically has for sign maintenance work, we set these general parameters for placing red and white markings on our new, Telespar® stop sign posts.  The solution we were looking for…

Why not manufacture posts with reflective material fixed directly to them?

In thinking on this, it seemed-

We thought a reflective, Channel-Shaped sleeve design – that could be affixed on a post – offered promise in that such a device would be- 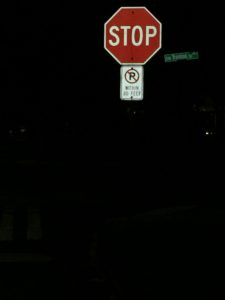 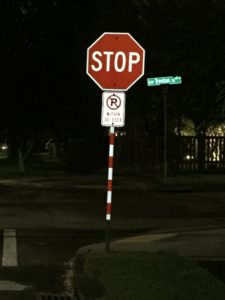 3-Sided Versus Other Sleeve Options-

We discarded the concept of marking/reflectorizing a post with a 4-sided sleeve.  4-sided sleeves would require sliding the sleeve down from the top of the post and would present issues with in-field retrofits.  Or this kind of design might require a moving part, like a hinge, to open and close around the post. 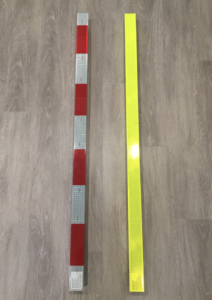 Seattle’s 2012-2013 Safety Grant for Stop Sign Maintenance and Enhancement- Why you will see reflective sign sleeves distributed and installed around Seattle.    …and other locations…

This is how the concept was put in the public realm and became known.

In late 2012, our state Department of Transportation (WSDOT) put out a call for safety grant applications.  The timing for pulling together the grant was challenging.  The call for applications came roughly the week before Thanksgiving.  The applications were due the first week of the new year.  We didn’t have any safety projects designed and ready for submittal at that time, and the time frame for the grant wasn’t enough to generate a project that would require complex design.

Knowing that Seattle has an aging population of stop signs, we thought we’d try to use the grant to meet a pair of pressing needs – safety and maintenance.  SDOT does maintenance of its critical signs, but funding for this work is very limited.  The replacement of our old stop signs was proceeding at a slow rate.

Likewise, SDOT programmatic funding for making safety improvements is very limited.  Typically, our traffic safety program has funds to make spot changes to something on the order of 20 to 30 locations per year.

Seattle has thousands of stop-controlled intersections.  Added up, significant numbers of collisions take place at these intersections.  From a safety perspective, the prospect of changing out a large number of our old stop signs was very attractive as this offered to make a tangible, safety-related improvement at many hundreds of locations – in a highly visible way – throughout the city.  …and this is work that has to be done periodically, anyway…

With the idea of addressing a safety need, along with this key maintenance need – in the short time given – a proposal was put together for replacement of stop signs throughout the city.

As an added element of maintenance, the proposal included changing out the old wood stop sign posts, many of which were 40 years old or more, with new Telespar® posts.

Typically grant sources don’t fund straight-up, replacement-in-kind maintenance work.  Funding sources generally want jurisdictions to include an element of improvement or “upgrade” as part of their grant proposals.  Having developed the concept for our reflective post sleeve, Chris and I were in the course of putting together our provisional patent application for the reflective sleeve.  We offered to the SDOT management team our reflective post sleeve concept- that the reflective sleeves could be included in the proposal as an “upgrade” to enhance sign and post visibility.  Our team liked the idea and decided to include it as part of the grant submittal.

This grant proposal, including installation of the reflective post sleeves, was funded by WSDOT for nearly $1,000,000 in 2013.

For the record, our work on the development of our reflective sleeve product and patents has been independent of our work at SDOT.  This work has been (with many evenings and weekends spent working over our kitchen tables) on our own time and with our own (not City) resources.

We greatly appreciate that the City of Seattle allows such independent innovation.  There are many people in the City who we’d like to thank for their thoughts, guidance, and moral support in this project!

When the sleeves came up in at the work place (to avoid impropriety), we remind staff of our interest in the sleeves and recuse ourselves from decision-making regarding their use.

We completed and submitted our provisional patent application on February 21, 2013 and were awarded a patent (US 8915045) for our reflective post sleeve on December 23, 2014.  We subsequently submitted another application for modifications and upgrades to this patent and received another patent last year (US 9574312).  We have applications submitted for additional patents, including for Canada.

*Since the creation of this story additional patents have been secured.

For more information on this product, please visit our product page here