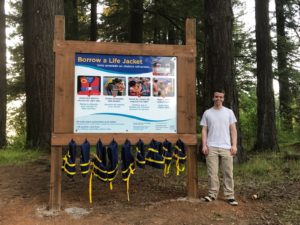 Dylan’s project relied solely on donations, a requirement from the school, as well the approval from the Washington Park Department in order to set it up.   Traffic Safety Supply Company, provided Dylan with the sign, featured in the photo above. Shawn Ramirez, the local business owner of Suncrest Landscape and Design, helped Dylan design and concept the idea.  The life vests were donated by the Washington Parks Department and fundraising help was provided by the Camas Volunteer Firefighters.

Dylan’s passion for this project came from his years of being a Boy Scout and his love for activities on the water. Boating is one of the many hobbies he enjoys with his family during the summer months. He wants people to have fun on the water but also remain safe, as there have been accidents in this particular spot, one he and his family often frequent.  Having on-site life vests provide an option for those that may have forgotten theirs, can’t afford one, or for those that aren’t quite sure of their swimming abilities.  The station encourages people to borrow one and shows them how to properly wear them, before they play in the water.

So, far the vests have seen some use, even this early in the season.  During the hottest day in May, all of the life vest were in use, as people were having fun on the water.  Now that’s a lifesaving idea!


This site uses cookies to provide you with a great user experience. By using this site you have accepted our use of cookies.Accept